How do we make sure those usually left out of the Census are counted? 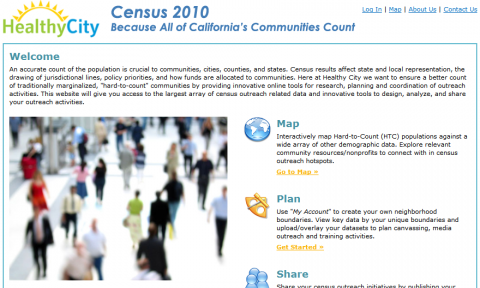 An accurate count of the population is crucial to communities, cities, counties, and states. Census results affect state and local representation, the drawing of jurisdictional lines, policy priorities, and how funds are allocated to communities. Working as part of a statewide public-private-philanthropic partnership, we created the first online platform designed to track outreach and increase the participation of “hard to count” populations in the 2010 Census.

First, we looked at "hard-to-count" populations across the state and tracked 2010 Census participation week-by-week in these communities. Our partners conducting outreach were able to customize maps, upload data and share information across different organizations. The platform allowed organizations to enter the locations of their canvassing efforts and the demographic profile of the community members they were targeting. Through the custom-created profiles and neighborhood boundaries, organizations, government programs and foundations could share and identify where their outreach efforts overlapped and where there were gaps in coverage efforts.

Increased participation and funding for LA

As a result, the “Hard to Count” Project contributed to L.A. County exceeding its goal of a 70% or better participation rate in the 2010 Census. Also, in an after-action assessment of this work, it was found that neighborhoods which received targeted outreach activities using Healthy City’s data and maps outperformed similar neighborhoods. This improved Census count in these areas equate to $3.3 billion in federal funding that LA County would have lost over the next ten years without this unique collaborative effort.

Beyond the Count by USC Program for Environmental and Regional Equity

← Back to Case Studies

Accepts .xls(x) format.
A column in your file should match values with a Healthy City field.

Check this box if geocoding for APCA research projects.

Column name in your file that links to a Healthy City geography.

Select the Healthy City geography and field whose values match with your chosen Link Field.

Permissions for this Layer

Save Layer before Switching Tools?

FIELDS FOR THIS LAYER

Your Group Portal will be located at https://www.healthycity.org/g/[slug]/

You can add members and manage group data after saving.

Your Group Portal is located at https://www.healthycity.org/g/[slug]/

Load file from computer
OR DRAG AND DROP FILE IN THIS WINDOW
Loading...
Remove

Add each email address or Healthy City username on a separate line.

Choose Maps for this Group

Choose Data for this Group

Choose Geographies for this Group

Would you like to transfer your saved WikiMaps and datasets to the new platform?

Would you like to transfer your saved thematic data to the new platform?

Welcome to the new Healthy City!

After confirming your account with the new system, you will have the option to transfer your saved WikiMaps and datasets to the new platform.

Save your map to create a persistent URL with this data